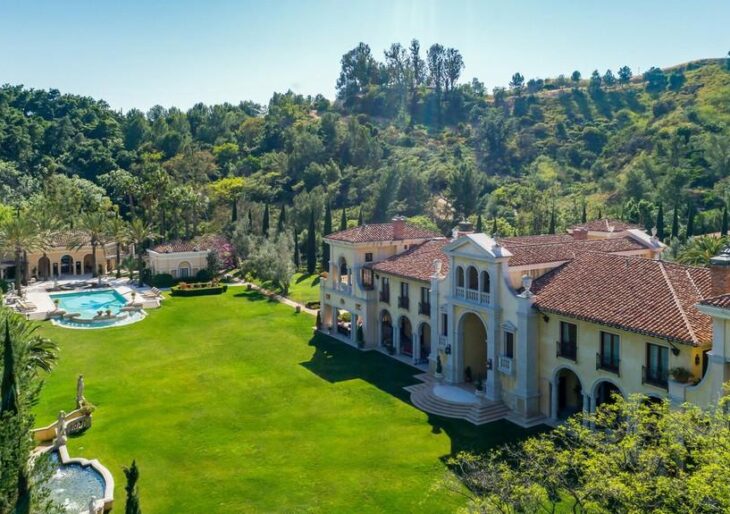 The news was surprising to say the least; the property had been listed for as much as $165 million during its three years on the market, and it had been asking $160 million prior to the news of the upcoming auction. More surprising still was the fact that the auction would have no reserve price.

The auction concluded, the funds recouped for Udvar-Hazy amount to $51 million, less fees.

Although most buyers in the $50+ million home price category will have their own set of criteria for what a trophy home is—or, tellingly, should be—this Riviera-inspired stone-walled behemoth on its ten acre slice of Beverly Park might fit the classical postwar definition for this neck of the woods.

The estate is accessed by a private road, and features a long drive that concludes at a 30-car motor court with a landscaped fountain centerpiece. The main house was completed in 1998, and designed in the rustic Tuscan style, with exposed ceiling beams, inlaid stone floors, and a herd of fireplaces—ten in all. Amenities in its 28,600 sq. ft. of living area include a wine cellar, a library, a home theater, and a cavernous great room.

Outside, the acreage is well occupied, with a pool, a tennis court, a guest house, walking trails, and covered and uncovered patios in its leisurely layout. An adjacent lot was available when the home was listed; no word on whether it was included—presumably not—but Dirt reported that furnishings brought the final bidder’s tally to about $60 million in all.

Udvar-Hazy’s net worth is north of $4 billion.