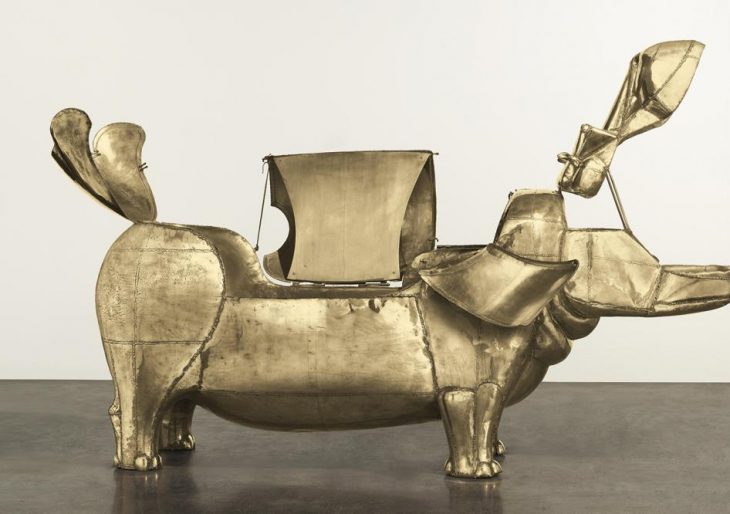 At the Christie’s New York auction last month, the work ‘Hippopotame I’ finished at $4.3 million, making the seller very happy indeed: the unnamed person’s $168K investment 13 years ago has paid off royally, enough to send them on an extended safari.

The 10’-long piece is crafted from brass and copper. Like other pieces byFrancois-Xavier Lalanne and his creative and romantic partner Claude, the sculpture isn’t only made to be seen. Within its corpulent representation hide a sink, a tub, and a space in the rump presumably intended for towel storage.

The logic of the design is marvelous; the listing reports a quote by Mr. Lalanne in 1970 thusly: ‘A bathtub and a hippopotamus make a better marriage than a bathtub and a zebra’; very true, as anyone who’s tried to take a bath in a zebra will tell you.

The sculpture dates to 1968. The name suggests there was at least one other Lalanne hippo…and there was. The year 1976 saw the ‘Hippopotame II’ emerge from the wilds of the Lalanne workshop in Ury; the second hippo opened to reveal a bar.

Lalanne passed away in 2008. Claude’s career included a stint at Yves Saint Laurent; she passed away earlier this year.