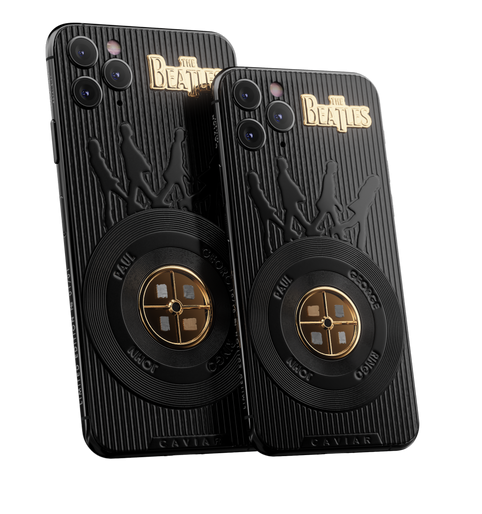 Steering even further afield from its initial politically charged entries, Russian design house Caviar has ventured into pop cultural waters. The company’s latest specialty iPhone takes a celebratory approach to the work and legacy of the Fab Four. It’s called the iPhone 11 Pro Superior The Beatles.

Caviar’s latest closely follows the release of the company’s Steve Jobs phone. Like the Jobs phone, the techy communicative Beatles homage does incorporate a quasi-religious artifact of personal clothing—or, rather, four of them—into its build; as in the Jobs entry, the historical embellishment is a peculiar form of authenticity, but a form of authenticity nonetheless. And, like the Jobs entry, this Caviar item errs mainly on the side of tasteful.

The case is also embossed with the group’s Abbey Road walk in silhouette (if you look closely, you can just make out Ringo’s schnoz) along the edge of a record. The suggestion of motion is intended to ‘spin’ the record. But it might also symbolically suggest circumnavigation. The significance is, of course, the fact that an appreciation of the complex but infectious music of the group is a common denominator for much of the world.