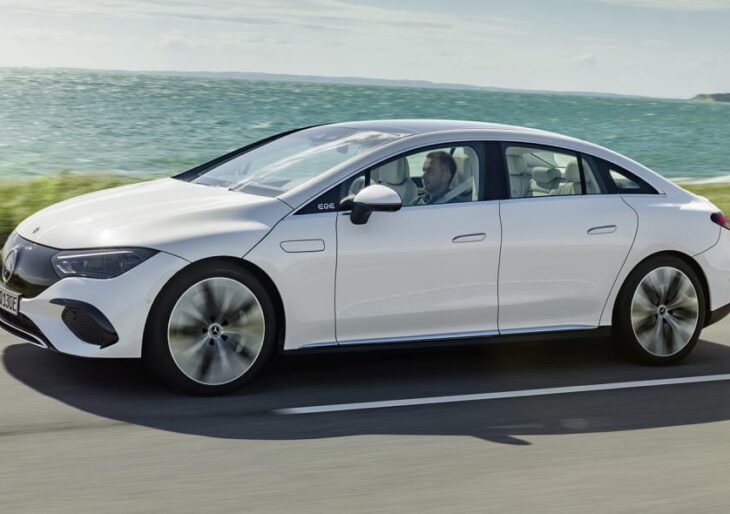 Mercedes-Benz gave the world a peek into the company’s 2023 model year EV lineup recently when they published an in-depth examination of the upcoming EQE executive sedan ahead of its official unveiling in Munich.

The new EV shares design language with other Mercedes EQ designs, including the cab forward architecture. It’s a nimble-looking four-door, with a concise front end and a gracefully abrupt rear gradient that makes the progression from the windshield one continuous curve.

The EQE’s wheelbase is 3.5 inches shorter than the EQS. Like the recently unveiled 2022 EQB, the EQE will initially be offered in two variants: the EQE 350, and another which Mercedes’ press release indicates will be revealed in the near future.

Using WLTP cycle methodology, the EQE’s range is estimated to top out at 660 kilometers, which shakes out to about 410 miles. The powertrain includes a 90 kWh battery. The model’s interiors present a more efficient use of space than previous E-Class models, and it borrows that efficiency of design and its equipment from the EQS, including the new ‘Hyperscreen’ for the MBUX suite.

The EQE’s tech includes over-the-air updates that include and a series of atmospheric sight-and-sound features. Among them are ‘Roaring Pulse’—which can be ordered—and Vivid Flux, which some readers may recall from a look at the EQS. The visuals are summed up by Mercedes as ‘Electric World’: blue and orange are the dominant colors. Mercedes has installed an aroma based on dark chocolate into the model as well.

The EQE’s driver assistance feature set will include Attention Assist, which uses a camera directed at the driver to keep track of eyelid movements and prevent drivers from falling asleep at the wheel.