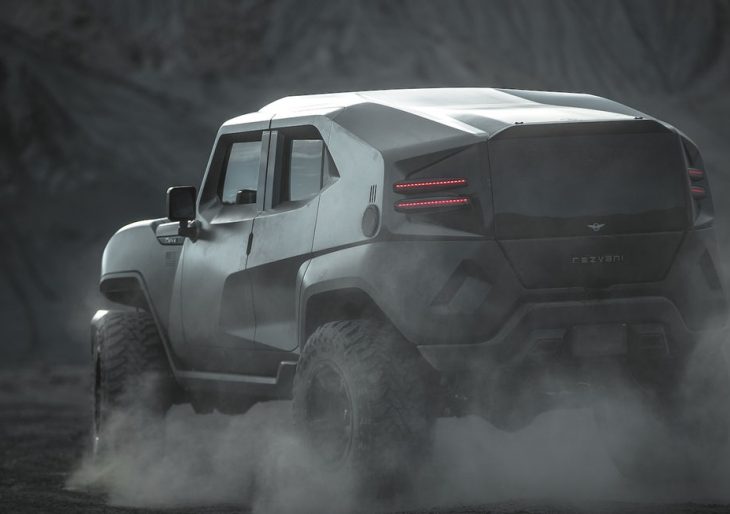 No designer of contemporary consumer-oriented street tanks should rest on their laurels for very long, and certainly exotic car manufacturer Rezvani is far from assuming so apathetic a position. Their newest formidable road-goer is the Tank X, which merges the post-apocalyptic appeal of the Tank with the performance profile of a supercar.

The California-based company that brought us the Beast exotic sportscar in 2015 rolled out the first Tank last year; like their initial exotic car offering, the Tank uses an existing automotive chassis as a starting point. There’s a Jeep hiding underneath that angular exterior, although you’d never know it unless you really scrutinized the vehicle.

In an illuminating way, the layered structure of the tank mirrors its text and subtext. The cultural symbol hiding within its stealth-influenced design language is a cryptograph that leaves the clumsy and flashy Hummer in the dust, hopelessly passe and obvious. At face value, a fully-optioned Tank can be purposed as an armored protector for those who need a dramatic solution, an escape vehicle capable of withstanding a serious attack.

The Tank X adds a new wrinkle to the progression. In this variation, Rezvani has attempted to reconcile supercar and super-SUV, packing an eight-cylinder Hellcat engine under the hood that’ll produce over 700 horsepower. That’s enough juice to get it out of most difficult off-road situations; more importantly, its enough to appeal to the deep-pocketed buyer who has dreamed of an exotic sportscar/SUV hybrid that’s more masculine-looking than the Italian bull it has squarely in its sights.

The Tank X is, Rezvani says, as responsive as a supercar. And base-priced at $260K.