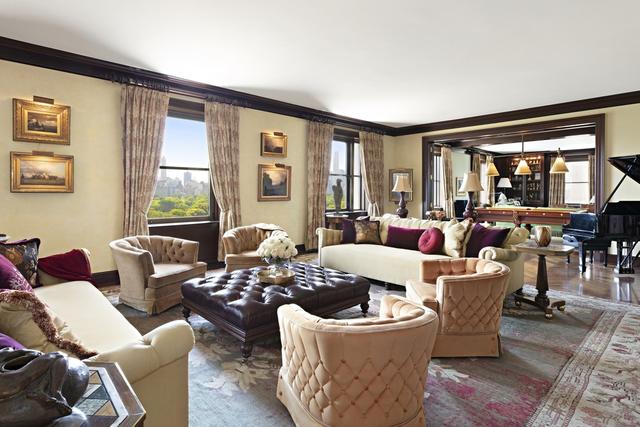 Actors Michael Douglas and Catherine Zeta-Jones relisted their pied-a-terre apartment in Manhattan this winter. The couple was hoping to collect something in the neighborhood of $21.5 million for the Upper West Side residence when it first appeared last summer, but the fresh listing comes with a price snip that leaves it asking $19.5 million.

The nine-room property was, at one time, a 15-room residence. Douglas and Zeta-Jones hired designer Thierry Despont to open up the property, and convert its compartmental feel into a more lavish evocation of space; as an example of the finished project, the dining room, living room and library have been combined into a single large room.

There are four bedrooms and five baths in the unit, including a staff suite. Details and materials include built-in bookshelves, marble crown moldings, and herringbone-pattern hardwood. The kitchen features commercial-grade stainless and transitions to a sunny breakfast room.

Other real estate adventures embarked upon by Douglas and Zeta-Jones include the acquisition of a Westchester estate in 2019; that property drained $4.5 million from their collective wallet. In 2019, Douglas also listed the stunning property in Mallorca he’s owned since the 1990s, but ultimately decided against selling it and removed it from the market.