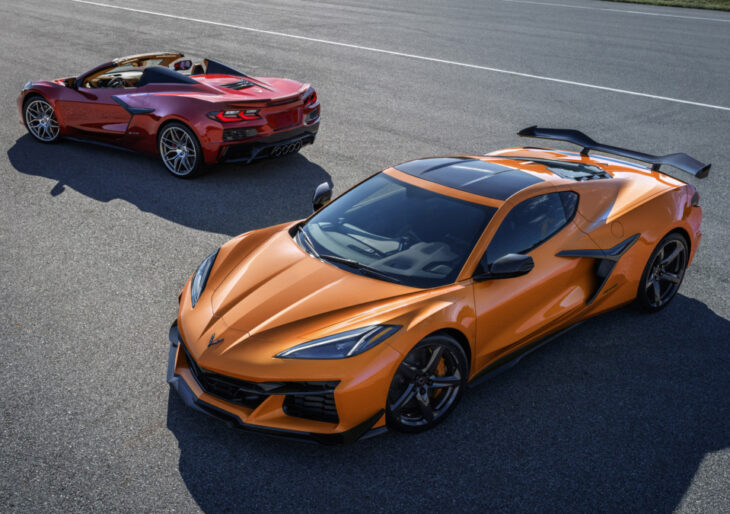 General Motors took the wraps off the Corvette Z06, its best-value supercar, for 2023 this fall. For the upcoming model year, the potent RWD ride comes with a major design alteration: the engine is now mounted immediately behind the cockpit.

The Z06’s V8 is a next-generation flat-plane crankshaft design that delivers 670 horsepower and 460 pound-feet of torque. Unlike its predecessor, it is naturally aspirated, dropping the supercharger of the previous Z06’s V8. It’s also a more efficient design, displacing 5.5L, down from the 6.2L displacement of the outgoing model’s powerplant; it redlines at 8600 rpm, which, the Chevrolet website tells us, is 2000 rpm higher than the Stingray. That’s what an additional $30K buys you.

Chevy also mentions the new engine’s sound, indicating that it might fool educated ears in a blind test and suggest a far more expensive supercar. Its performance may well have the same effect; the car’s stiffer chassis likely places it uncomfortably close performance-wise to far pricier exotics as far as their owners are concerned. The new Z06 can hit 60 in 2.6 seconds

The new engine is paired with an eight-speed, dual-clutch gearbox. The 2023 Z06 is also outfitted with 6-piston front, 4-piston rear brakes as a standard feature, although carbon ceramic brakes — and carbon-fiber wheels — are options available for owners who will spend a lot of time at the track. Michelin Pilot Sport Cup 2 tires are also standard.

Chevrolet’s current delivery schedule will put the 2023 Corvette Z06 in dealerships next summer. Pricing TBA, but an educated guess puts it in the $90k range.