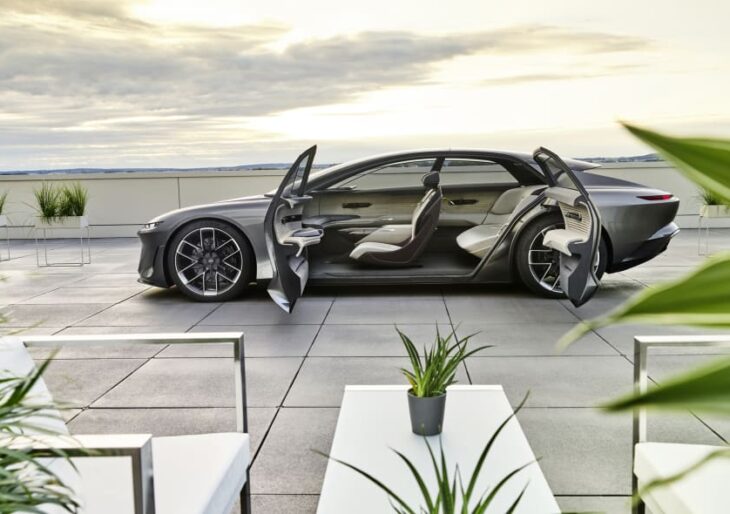 Audi Continues Preview of Decade Ahead With GrandSphere Concept

The first of Audi’s ’Sphere concept cars appeared less than a month ago, and laid the groundwork for a conceptual EV tripartite. All of the imaginative concepts feature manual and autonomous driving options, and all features layouts that can be converted from autonomous lounge to traditional roadgoing vehicle.

Audi unveiled the first of the three vehicles, the SkySphere, at Monterey last month—that made for a short trip for the trio’s designers, as it was dreamed up in the Audi studio in Malibu. The SkySphere was the performance and touring model of the three concepts; when in ‘Grand Touring’ mode, the pedals and steering wheel vanish as the wheelbase extends nearly ten inches for more lounge space.

To begin September, Audi unveiled the second in the series: the GrandSphere, a grand tourer with pretty lines culminating in a graceful fastback gradient. As it was revealed during the ‘Celebration of Progress,’ the script of Audi’s slick promotional video suggests it is an ideal of progressive luxury; as a component of a sweeping digital landscape, it gives occupants plenty of options to occupy them while they’re not driving or falling victim to highway hypnosis.

A look at the interior tells even a casual viewer that this model is thoroughly oriented toward the autonomous end of the driving spectrum in comparison with the SkySphere. Audi calls the car and its environment of 1s and 0s a holistic digital ecosystem, and promises an unheard-of breadth of on-board experiences while travel is underway. But, like the SkySphere reveal, the GrandSphere’s introduction is but a taste of what could transpire in a production version. For that kind of information, we’ll have to wait a bit.