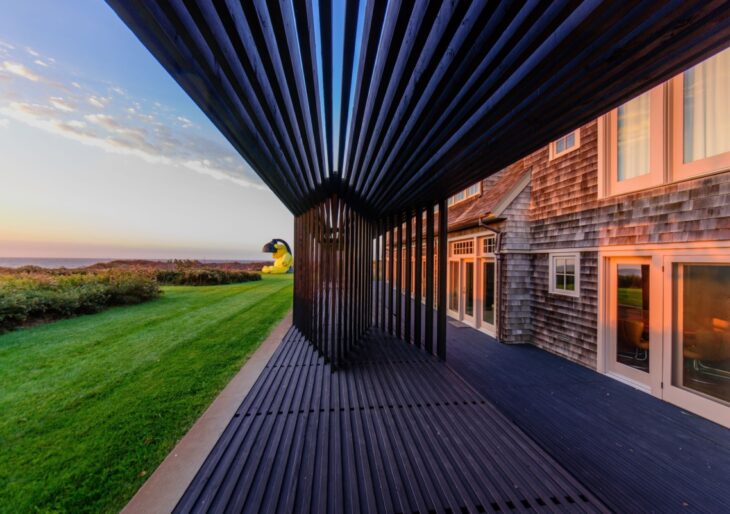 Investor and art world columnist Adam Lindemann sold a sizable chunk of his Hamptons retreat this summer. The promontory property on Montauk was listed on the open market at $24 million last year. According to Dirt, the home, and about half the land, was subsequently marketed for $15.5 million and closed recently for $12.5 million.

Lindemann had been marketing the property off and on for about five years. He retained ownership of a little less than half of the six-acre estate. The residence that changed hands is a 7,500 sq. ft. shingle-style that fulfills expectations for a classical Hamptons retreat.

The house contains six bedrooms and nine baths. Interiors are rustic and urbane, with a huge amount of hardwood cladding walls and ceilings as well as floors, and modern linearity acting as ballast for all the warmth. The living room is designed with a cathedral ceiling which has been given a coat of bright white paint, while the industrial-tinged kitchen sports stainless, and counters and an island which appear to be capped with concrete.

The nearly three-acre grounds have wisely been left in their natural state, with a deck that’s nearly an art installation overlooking the native scrub and ocean, and a pool immediately adjacent to the home.

According to The New York Post, Lindemann sold another Montauk compound last year—formerly owned by Andy Warhol—for $65 million. He had picked it up from former J. Crew CEO Mickey Drexler in 2015. The ask was $85 million, and the home sold for $50 million.