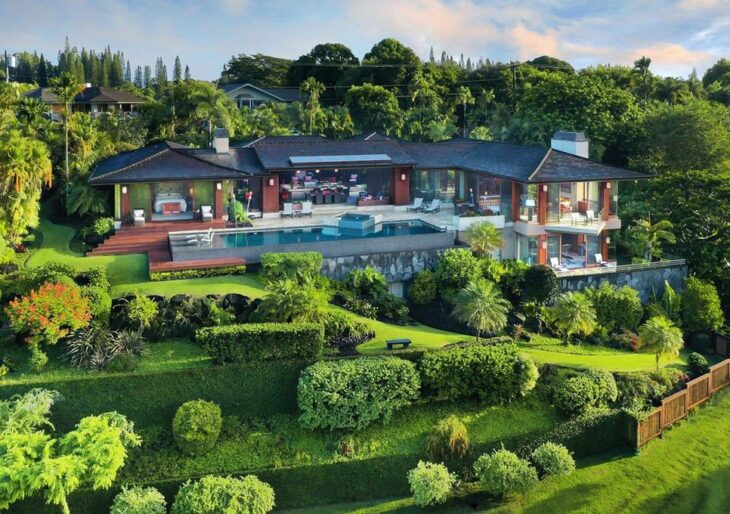 Carlos Santana Upgrades to Lush Retreat in Hawaii to the Tune of $20.5M

Musical genius Carlos Santana recently upgraded to a tastefully executed residence in Hawaii, paying $20.5 million for the keys. The iconic guitarist’s new property is on Kauai.

The 8,173 sq. ft. property is a gem. The house is atmospheric, refined, and earthy, with an abundance of wood and stone and an indoor/outdoor lifestyle that includes both retractable glass walls and a retractable roof section. It is divided into three interconnected structures that are arranged around a central outdoor living area.

The outdoor living area ranges far and wide, and includes an outdoor shower built into a stone privacy wall, as well as a dining area, a lounge, and a full kitchen and BBQ with a bar. Landscaping is similarly fluid, connecting the house’s interior living spaces with the grounds, and with the landscape itself. Views are stunning; dramatic, tropical vistas of mountain, vivid greenery, and ocean.

Santana also listed his previous getaway on the Garden Isle this summer. He was asking $12.9 million for the three-bed, five-bath, 4,620 sq. ft. Balinese modern home. Last summer he listed yet another residence on the island; the property, which includes a studio guest house, hit the market with a $2.995 million asking price.

Santana’s eponymous band charted at least one album in the top 10 of the Billboard 200 chart in six consecutive decades, starting in the 1960s; the astonishing feat of longevity speaks for itself. They scored a No. 1 album twice in the 70s, once in the 90s, and again in the 2000s.