Croatian electric supercar designer and builder Mate Rimac and his eponymous company are back this year with a new envelope-pusher of a model: the Nevera. The car is named after a particularly sudden and forceful breed of Mediterranean storm. It has incredible muscle to boast of, but first a brief history.

Rimac Automobili appeared a decade ago with the Concept_One, following it up with a production version at the 2016 Geneva Motor Show. The C_Two followed in 2018, adding dihedral doors and a more impressive screen layout to the cockpit; a California Edition added a little flash. The fact that Rimac builds the cars from the ground up in-house, and fabricates the specialized tools needed to do so, adds to the company’s appeal by suggesting obsessive dedication to craft.

The Nevera packs 1,914 horsepower — nearly double that of the Concept_One when Rimac announced production of it five years ago — and matches the C_Two’s absurd 1.85-second 0-60 time by reaching 62 MPH in 1.97 seconds. Rimac marketing hyperbole has the car’s capabilities as ‘beyond comprehension’; not quite, perhaps, but borderline mythological, or mechanically preternatural, in the present tense, and thrillingly realized.

The Nevera’s powertrain is founded on four motors, one assigned to each wheel with dedicated torque allocation for on-the-fly compensation when driving. Rimac calls the system AWTV — All Wheel Torque Vectoring — and it reassesses torque demands 100 times per second.

The model’s monocoque is carbon fiber, with a bonded carbon roof. The battery pack is slyly incorporated into the chassis, likely for weight distribution; that is, balance. Interestingly, its tech suite includes an AI-driven driver ‘coach’ feature, a unique take on driver assist that’s designed for high-speed endeavors.

The Nevera is also exceedingly attractive. With its rear wing up it looks track-ready, but its lines are graceful even with such a stark symbol of high-speed pragmatism deployed. How much does this beauty cost? $2.4 million, or thereabouts. 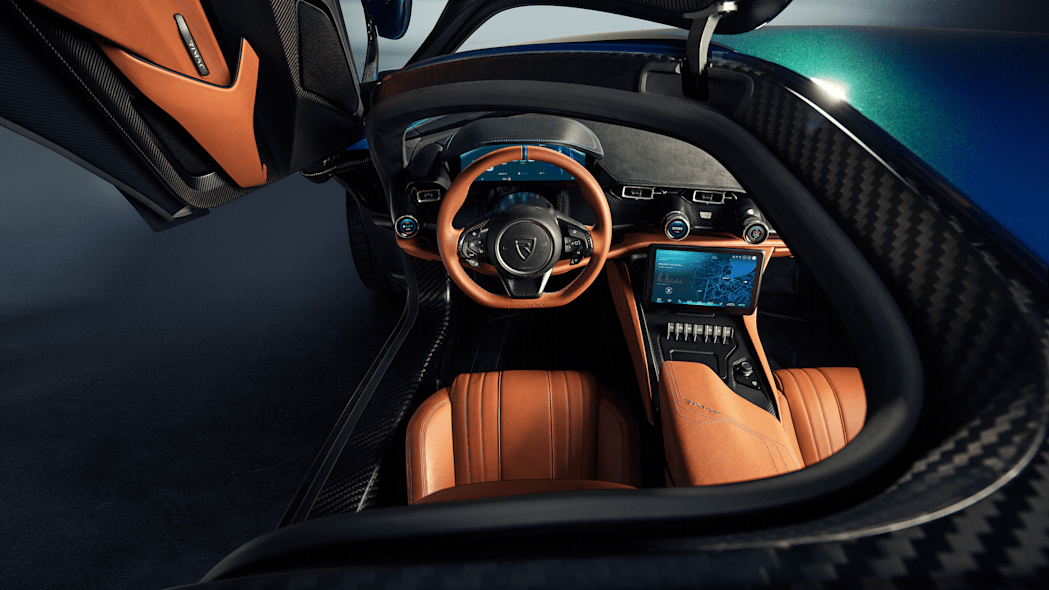