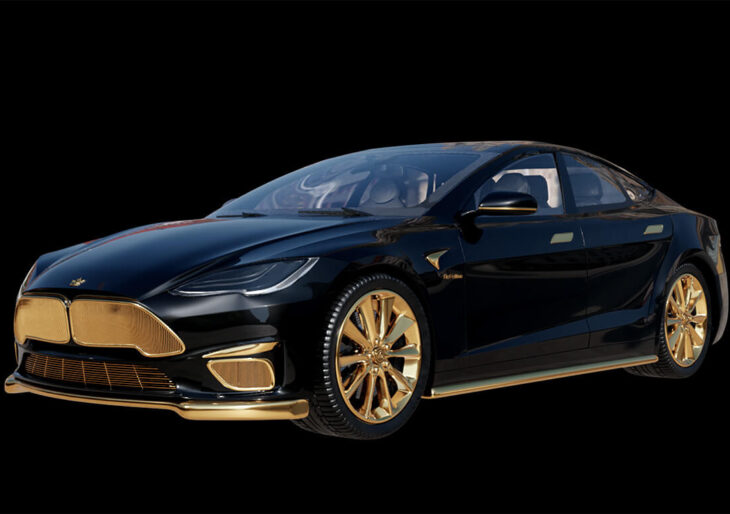 Russia-based specialty firm Caviar usually works its Midas-touch know-how on smaller objects, with the iPhone having been the basis of the young company’s métier. Apparently, Caviar’s proportional aspirations have grown slightly, as their newest bit o’ bling rides on four wheels and can hit 200 MPH by the time its electric powertrain’s speed potential is exhausted.

Yes, it’s a Tesla Model S, and a Plaid variant at that. It’s called the Model Excellence 24K and is priced at $299,999. Those familiar with the Caviar’s unique sense of style won’t be surprised by the concept treatment this car has received; newbies may either be dazzled by its astonishing garishness or entranced by its spirit of subtle suggestion. Either way, it is typically remarkable of Caviar; a glistening trinket. Albeit one that weighs in at 2.5 tons.

Details of the Richie Rich-esque Model S include side skirts and wheels in what Caviar calls ‘Ecstasy of Gold’—a double electroplated coat of 24K gold, a process defaulted to throughout the design—and a gold ‘Thunderball’ grille that apparently arose from inspiration garnered from a James Bond flick…although Bond would likely opt for something more discrete. What about George Smiley, you ask? Wethinks not; dourly received. Jerry Westerby would be amused, though.

The craftsmanship necessary to bring such a blinding vision to fruition is no doubt extraordinary. Caviar’s website says only 99 will be made, and issues a final warning: “Be careful, you can dazzle those around you with your splendor.”