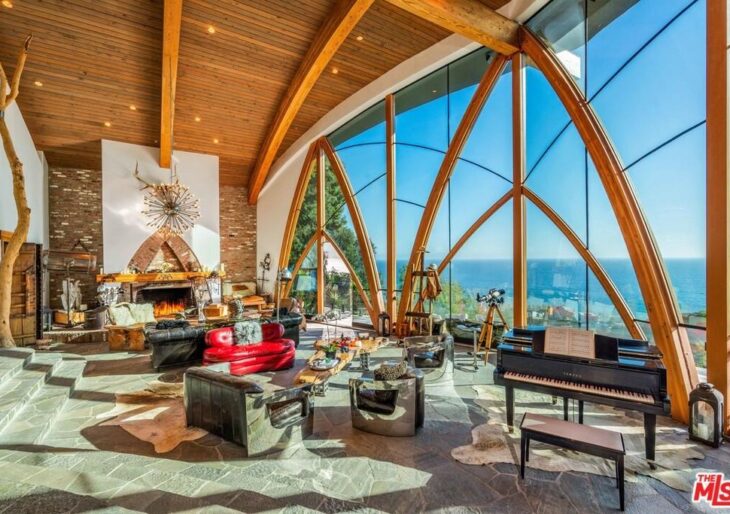 Gesner’s Ravenseye Masterpiece in Malibu Available for $9.5M, Down From $14M Original Ask

Ravenseye, architect Harry Gesner’s marvelous postmodern residential amalgam in Malibu, is back on the open market with yet another price chop. The sculptural house is currently priced at $9.5 million, a far cry from the $14 million ask the 4,170 sq. ft. home was issued when it first hit the market during its current bid for a new owner.

Ravenseye is at least the fourth Gesner home to be offered for sale in the past year, following the Triangle House in Tarzana, which hit the market at $4 million last spring and is currently listed at $3.35 million, the Stebel House in Hollywood Hills, which appeared last fall at $1.997 million and was promptly snapped up, and the Flying House which hit the market in Hollywood Hills for $8 million toward the end of last year and fetched an over-ask sale price in March of $9.4 million.

Of the four, Gothic-preoccupied Ravenseye is arguably the most visually fascinating. The recessed entry offers a playful riff on postmodern, with a medieval-inspired front door and blue slate landing echoing the soft blue of the home’s paint color. In back, the house boasts a rear face of soaring glass interspersed with timber.

Inside, all that glass results in a great room that is nothing if not cathedral-like. The living style is as rustic as it is adventurous in design, though, with an abundance of hardwood, slate floors, and reclaimed accents.