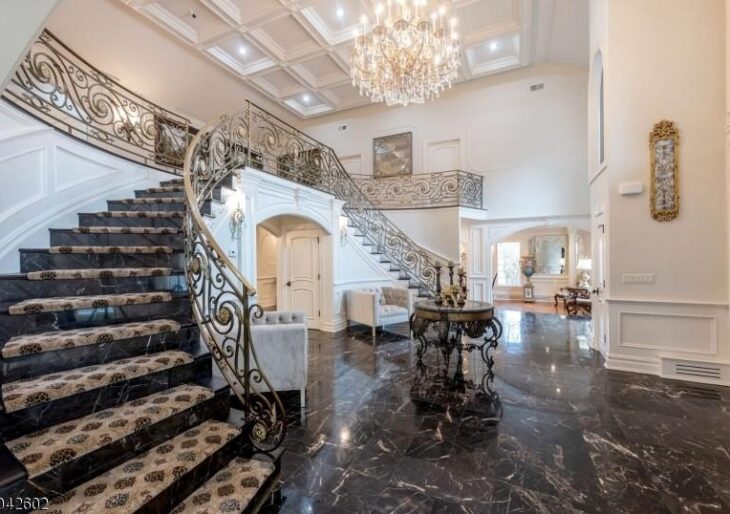 Last month, former RHONJ fixture Teresa Giudice was just settling into her overtly aristocratic, newly purchased manse in the Garden State. The TV personality picked up the manor in Montville Township, her stomping ground, for $3.4 million.

But Giudice also had a Montville Township property in the outbox, a postmodern suburban palace of 10,000 sq. ft. that the Real Housewives of New Jersey graduate had been trying to sell for about five years. Until this spring, when an offer came in that will likely give the property a new owner, and just as likely put around $2.25 million into Giudice’s pocketbook; the property is currently listed as pending.

The house features an exterior that riffs on Victorian—well, the pair of turrets does, anyway—and mixed manor-style too, featuring stone accents, ornamental columns, and a porte-cochere. Inside, it’s very ornate, beginning with a grand foyer decked out with a double staircase, black marble tile and stair treads, and a riotous crystal chandelier extending from the double-height coffered ceiling.

A lengthy formal dining room with an inlaid oak floor—mainly herringbone pattern—and an extravagant carved fireplace, a kitchen with plentiful millwork, and a massive living room with a wet bar and marble tile floors also catch the eye. A wine cellar and a billiards room list among the amenities.

The home sits on a 3.77-acre lot. Landscaping incorporates lawns—with a couple of ha-has thrown in for good measure—forest, and a loggia overlooking the outdoor living area.