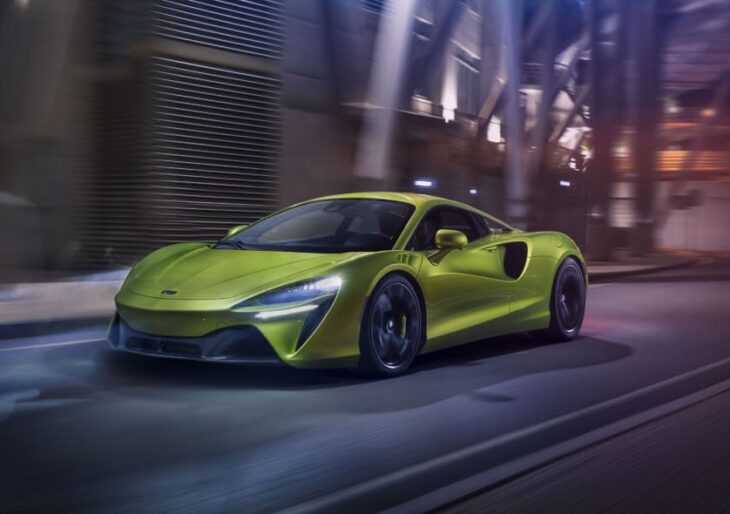 At last, a regular-production model McLaren with a hybrid drivetrain.

This week, McLaren Automotive took the wraps off their new hybrid supercar. The car’s drivetrain follows in the wake of 2018’s gorgeous Speedtail. The model is called the Artura, and it’s packed with interesting technological features as well as the expected dose of track-inspired performance and power.

On the subject of the Artura, McLaren dubs it “An All-New Era,” and that’s cheering to see for not only ecological reasons; the supercar marks a significant milestone in the automaker’s electrification efforts. It also makes sense from a marketing perspective; as the brash, brilliant leader of the exotic car niche, McLaren should be blazing the way into alternative-fuel drivetrains.

The car’s exterior shows off the racing design form fans have come to know and love, and it’s as prettily sculpted as McLarens come, with a big greenhouse for a cockpit. But what’s hiding within that fetching shape is a 671-horsepower combination of a 2.9L V6 biturbo and an electric motor, and an 8-speed with no reverse gear—the electric side of the drivetrain handles backing up. The battery complement can be charged to 80% in 2.5 hours. Electric range is 19 miles.

What’s hiding in the Artura is also a great deal of weight relief. The car tips the scales at just over 3,303 pounds. According to McLaren, four new types of carbon fiber are involved, as are a new resin system and new core material; somewhat cryptic, but light and stiff are the results. The designers also shed weight across the car’s systems; for example, McLaren’s new electronic differential is lighter than previous designs.

Other treats in store for the progressive and adventurous driver with $225K: a newly designed rear suspension, a top speed of 205 MPH, a 0-60 time of 3 seconds, and a 0-124 time of 8.3 seconds. Four trims will be available: Base, Performance, TechLux, and Vision.