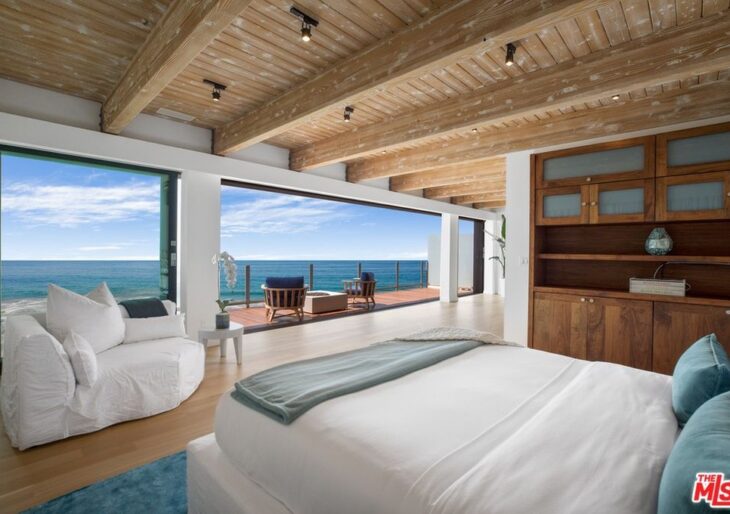 Actor Matthew Perry has had a pair of Los Angeles-area properties for sale in the past two years; one of them is the so-called ‘mansion in the sky’ penthouse in the Century Building, which he listed for the first time in 2019 for $35 million, but which saw a price reduction before being yanked from the open market late last year.

The second is this 1906-built getaway on the other side of the PCH from Corral Canyon, and Perry’s had a bit more in the way of luck selling that one. This month, a buyer stepped forward with an offer of $13.1 million for the glassy waterfront house.

The 5,500 sq. ft. house features a mix of ‘classic’ Malibu beach cottage and contemporary upper-end design elements. The standouts are the unfinished ceilings and the Fleetwood doors that open living spaces on both levels to full-width balconies.

The common space is a treat; wide-open, breezy, and bright, with enough wood texture for plenty of warmth. The master suite is as appealing, and boasts a spa-like bath and a large walk-in closet. The property’s outdoor living spaces include an open-air Japanese bathhouse-style spa room with what appears to be cane window shades.

Perry’s incoming properties of late include a Pacific Palisades waterview ranch, which he picked up late last summer for $6 million.