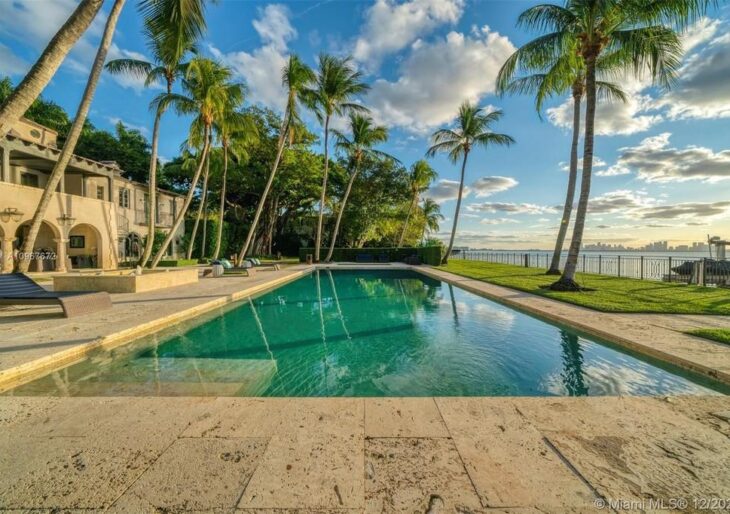 Singer and songwriter Phil Collins listed his retreat in Miami Beach just before the holidays season, but he didn’t have to wait terribly long for a buyer to come along and shell out something in the neighborhood of $40 million for the enchanting beachfront villa. The property is currently listed in pending status, so the sale price—if the home closes—hasn’t yet been recorded.

The house is designed in the mixed Mediterranean style, and was originally completed in the late 1920s. It measures 11,039 sq. ft. and contains six bedrooms and nine baths. The 1.2 acre parcel is located in the La Gorce community, and features nearly 200 feet of waterfront on Biscayne.

The house has been revised over the years, but original details remain. The barrel ceiling that crowns the dining room is an exceptional example of the architectural flourish; ornamental leaded windows, a limestone terrace, and some of the flooring also appears to hail from the era of the home’s construction.

The lot is distinguished by a gated primary access and a driveway lined with venerable palms; the landscaping follows suit, putting the finishing touch on the property’s intoxicating sense of history. Outdoor living areas include a rear loggia that overlooks a large swimming pool and, further along, a deep-water dock on the Bay.

Collins is an eight-time Grammy winner. His worldwide record sales are said to be around 150 million. The Genesis singer and drummer is also a member of a very exclusive club: Only he, Paul McCartney, and Michael Jackson have sold over 100 million records both as solo artists and as members of a band.