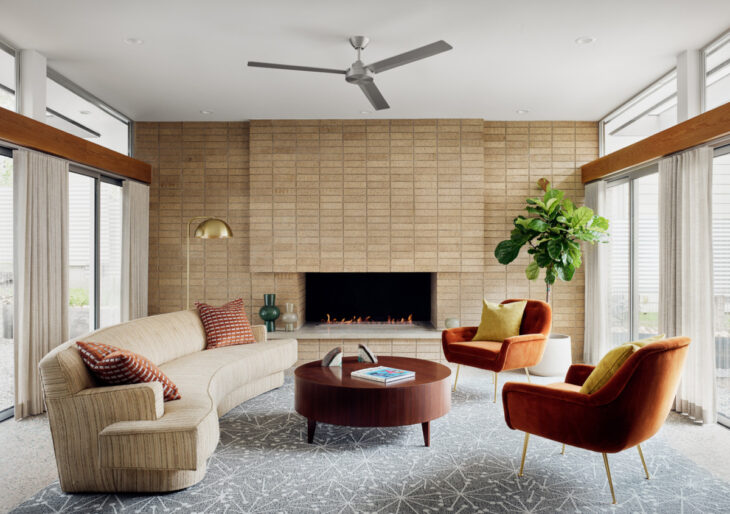 “The Inglewood Residence is a 2,400 square foot light-filled Mid-Century Modern home that was designed around a series of gardens and a centralized courtyard. The existing trees actively participated in the design of the home, both in terms of site preservation and heightening the relationship between interior and exterior. The intended experience is to be continuously connected with nature while moving through the house. An abundance of floor to ceiling windows lines each space. Terraced zones are created internally that help strengthens the interior programming as well as maintain visual perspective. A continuous brick wall acts as a circulation spine and moves through the center showcasing the north-south axis of the house and connects each space.

“The intended experience is to feel continuously connected with nature while moving through the house,” says Mark Odom, Mark Odom Studio. “The design inspiration was based on the “courtyard house,” centered around the existing trees as well as making sure natural light spilled into all interior spaces.” Exterior and interior material palettes are designed to be both subtle and complementary to the diffused natural light conditions, earth-tone context, and its Mid-Century nod.

The owner held a previous appreciation for the play between vertical windows adjacent to masonry walls, views into lush and inviting courtyards, exterior materials used on the interior, indoor planters, slatted screen walls, warm wood tones, and needless to say… terrazzo floors” all of which focused the design and eventually the construction of this unique residence. The second-floor loft, with an exterior patio, creates an alternate perspective to both interior spaces and downtown Austin views.

The size of the house is subtle, staying sensitive to its residential location, owner’s edited lifestyle, and choices to preserve the site’s natural resources. Gardens weave through the interior and exterior portions of the house allowing natural surroundings to blur the line between inside and outside, leaving no space un-designed. Speaking towards sustainable building methods and materials, Doug Cameron of ESS, cited the most challenging aspect of this light-filled house was “combining clean aesthetics with structural strength and energy efficiency.”

The team consciously chose to invoke a feeling of nostalgia into the user experience, all the way down to weathering the finish of the flatwork to mimic the original 1950’s driveways in the neighborhood. The build incorporated repurposed wooden bookshelves into the master corridor that originally came from our client’s father’s classroom, a former Texas school teacher responsible for much of our present-day public-school math curriculum. The terrazzo foundation was a tremendous team-building experience, as 1800 pounds of various colored glass was hand spread into the three-tiered foundation as the concrete was setting up. The finished floor broadcasts a one of a kind finish that won’t be duplicated.

The brickwork maintains one seamless datum line inside and out, while the raked joint stack bond eloquently honors the masonry of yesteryear. Careful and precise woodworking and craftsmanship of the white oak are showcased throughout the cabinets, door jambs, and planter shelves.  Daylighting was is a critical concept within each space of the home, as well as across spaces, courtyards, and corridors.  The low-pitched roofs are covered with a pebbled ballast, a feature of 1950’s homes.

The project is aiming for a 5-star Rating with the City of Austin Green Building Program. The entire lot was utilized remaining true to its original form. Historically, Native American’s used this high point to camp as they clung to the Colorado River, which was evidenced by many a hand tool spotted during construction. Doug Cameron’s fluid-applied sheathing to foundation connection (for insect mitigation & air-sealing) is an innovative feature of the build. A trim-less interior was achieved utilizing Doug Cameron’s patented #Densbase invisible baseboard detail.”