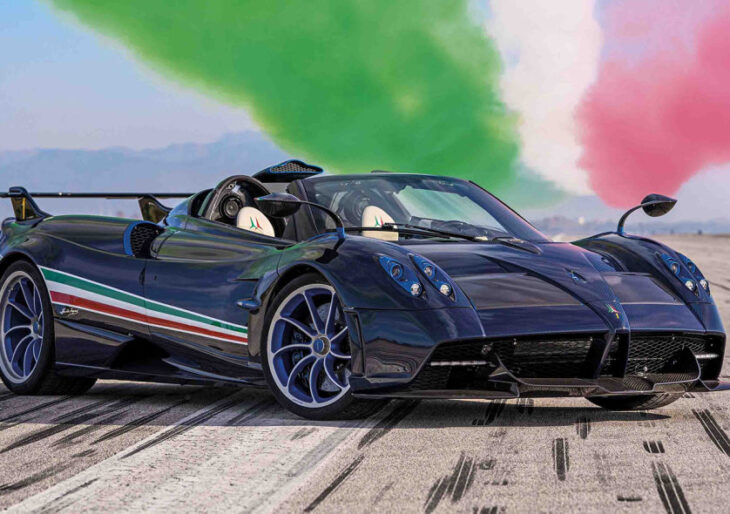 Two Italian automotive specialty firms have been working along similar lines, it turns out.

We’ve already had a look at Garage Italia’s Dallara Stradale PAN LX Anniversary, which is dressed in a theme inspired by the G.91 modified F-86E Sabre jet. The resulting livery displays the three colored arrows of the Frecce Tricolori, the National Aerobatic Patrol of Italy that operated in the second half of the last century.

Pagani has recently stepped forward to reveal the one-off Huayra Tricolore, which is similarly themed: it also pays homage to those Italian pioneers of air acrobatics. This Huayra is just as easy to identify by its motifs.

The supercar’s exterior features bold side graphics in the colors of the Italian flag over a sky-blue paint color, and its body has been adjusted to suggest plane design elements. Anodized aluminum trim—also blue—is used to enhance the look, and an aircraft gauge adorns the instrument display. Only three of the special Huayras will be offered for sale, at 5.5 million EUR.

Earlier this month, we also had a look at Bugatti’s homage to French pioneers of flight, the Chiron ‘Les Legendes du Ciel’ limited-edition.