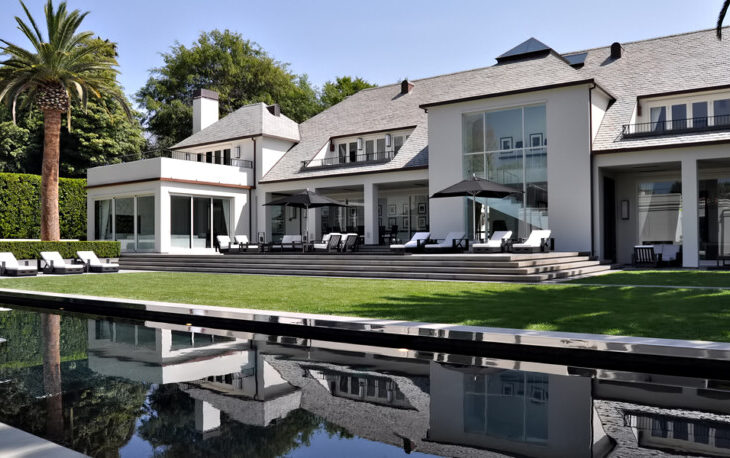 Simon Cowell Takes $25M for Elegant Residence in the 90210

Talent judge Simon Cowell recently parted ways with his Beverly Hills home. Cowell had the house custom built over the second half of the first decade of the century, and packed it with amenities and luxurious touches. This summer, the property sold off-market for $25 million, according to The Real Deal. The buyer, Alon Abady, is a managing partner at Waterfall Bridge Capital.

The mansion’s interior living areas measure over 9,300 sq. ft., with six bedrooms and six baths throughout two levels. The interiors are open, understated, and a little bit ethereal; off-white predominates, with black accents, and floors are stone.

A home theater, a solarium, a lap pool, and a putting green are other features of the property. Entertaining was also a priority during the home’s design; an outdoor wet bar and a cabana are highlights of the extensive exterior living, dining, and lounging area.

The house also includes accommodations for a butler and a maid, and a servant’s kitchen. Cowell had a top-flight security system installed as well; according to the listing, the system came with a million-dollar bill, and features retina and fingerprint identification scanning for entry authorization.

Cowell, who created ‘X-Factor’ in Britain and has enjoyed a long tenure as a judge on ‘American Idol’, recently suffered a serious accident while riding a powerful electric bicycle. News reports indicate that he is recovering well.