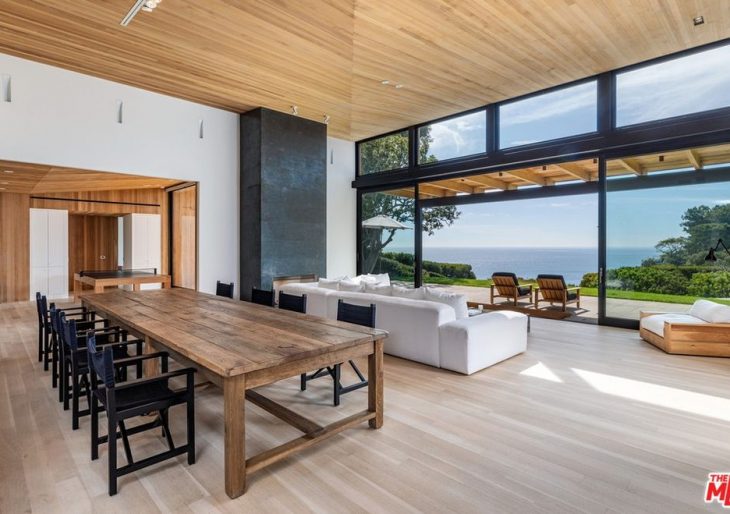 Fashion maven James Perse listed this fairly isolated Malibu retreat in the late winter of last year. When a buyer came calling this summer, it was none other than Gateway co-founder Ted Waitt. Perse had owned the property for about nine years at the time the home hit the open market in 2019; he purchased it in 2010 from none other than Chris Carter, the X-Files creator, and paid him $16 million for the keys.

The house was initially listed at $39.995 million. Perse made a few changes to taste during his tenure of ownership. As it stands, the modern-style home is possessed of a great deal of warmth; its interiors present a great deal of hardwood to the eye—floors, ceilings and walls—nearly all of it finished in natural tones.

The 4,209 square-foot Point Dume home contains five bedrooms and six baths, Its open-concept shared living area features a soaring ceiling, a monolithic accent wall with a modern-style fireplace, and a kitchen inspired by Japanese interior styles. It is strikingly unadorned by ornament, with long, clean lines, and a quietly but somewhat severely meditative spirit. A blazing white treatment gives it an ethereal feel.

The 1.3 acres of grounds are incredibly appealing, and very private. Glass walls open to a pergola-shaded patio, the frame of an extended arbor is awaiting the planting of flowering vines, and lawns are broken up by subtle tiers that climb toward a property perimeter that is lush with mature trees and shrubs. The focus of the property exterior, however, is the exceedingly private beach setting that comes with ownership.