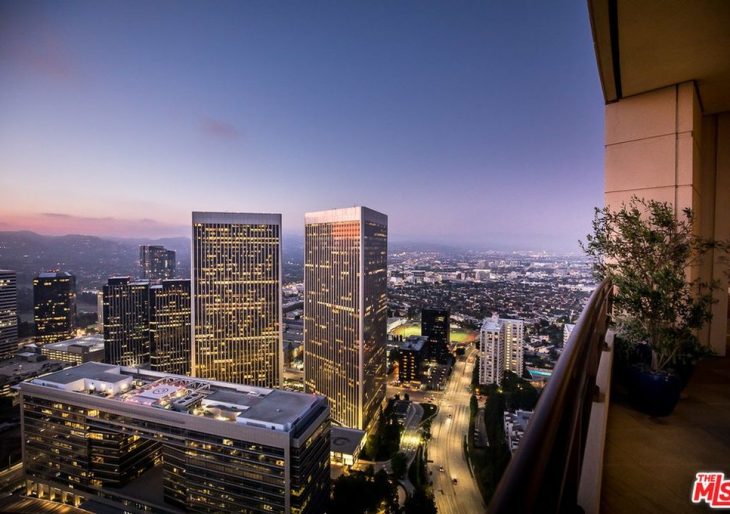 Very nearly a year ago now, Matthew Perry listed his penthouse in West Los Angeles. Last summer, when the 10,000-square-foot unit appeared, it was priced at $35 million. The summer of 2020 finds the ask trimmed considerably; it’s been given a fairly hefty chop of over 20%, and the property is now asking $27 million. Perry purchased the aerie in July of 2017, and paid $20 million for it—against an asking price of $27 million.

The unit occupies a full floor in the Century building, and dates to 2010. Interiors—currently by way of noted designer L.M. Pagano—divide the home into two primary crescent-shaped spaces: the great room and the master bedroom. These two spaces establish a fundamental balance in the residence. Both rooms feature support columns, and a cool/warm contrast between soft green ceiling, soft blue walls, and hardwood plank floors; the result is an amenable variety of tension. The panoramic views from the convex glass walls are astonishing.

The penthouse boasts four bedrooms in all. The master features a private salon with a fireplace, his and hers baths, and cavernous closets. Amenities in the residence include a screening room—the floors, wall and ceiling of this room are covered, giving it a uniquely immersive atmosphere—and an outdoor terrace with delirium-inducing city views.