Hass House in the Catskills by Feuerstein Quagliara

“Overlooking 45 acres of farmland in the Catskills, Hass House is a playful reconfiguration of the traditional American side-gabled house. The design provides a diverse set of environments with expansive views out to the pastoral landscape from every space. We began with the creation of a linear “program bar” oriented on the north-south axis in order to take advantage of the site’s primary southern view and exposure.

The bar was then segmented into six equal blocks corresponding to each of the programmatic requirements: guest bedroom, entry, dining room, kitchen, living room, and master suite. By slightly shifting the entry and master suite blocks, a series of residual spaces developed along the length of the bar.

A continuous gable roof was then placed on top of the entire reconfigured bar, allowing the negative spaces between the blocks to be used as covered outdoor spaces. In this way, each program type is connected to an outdoor space made accessible through floor to ceiling sliding glass doors, providing both visual and physical connections to the landscape from every room.

Planning wise, the master and guest bedrooms are separated by a combined block of free flowing living, kitchen, and dining spaces. This created a more casual and communal atmosphere for entertaining while accommodating for privacy between the two bedrooms. The entire southern wall of the living spaces is made up of a 48’ long run of sliding glass doors, which offer expansive views of the site and open to a large covered deck. In turn, the guest bedroom looks out to the landscape in the South through a more intimately sized covered deck. The master bedroom is connected to a private garden with openings to the sky above and the sunset to the west.

The form of the traditional gable roof allowed the interior spaces to be shaped to complement the nature of the programs. Smaller more compressed volumes were provided for the sleeping spaces and were given flat ceilings, while the large free flowing communal area alternates between vaulted and flat ceilings to provide subtle borders between the three programs.

This pattern of compression and expansion adds nuance and rhythm as one moves throughout the linear floor plan. Black stained rough-cut pine siding was selected for the exterior cladding, which in conjunction with the building’s simple form creates a graphic silhouette against the landscape. Inside, concrete floors, white walls, and Baltic birch plywood millwork create a light and muted palette to contrast the dark exterior.

Skylights in the communal spaces provide diffuse lighting and facilitate cross ventilation in the warmer months. The north wall of the communal spaces is composed of a long bar of storage cabinets, a concrete bench, a wood burning stove, and a small alcove for storing firewood. The kitchen is defined by two large Baltic birch and concrete islands which create a buffer between the living and dining spaces.” 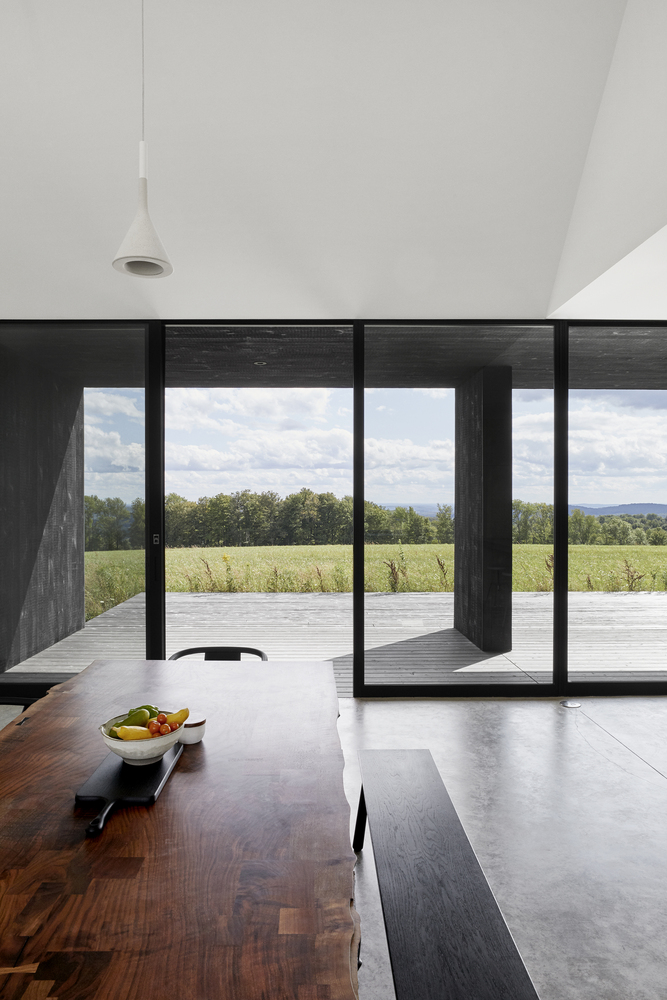