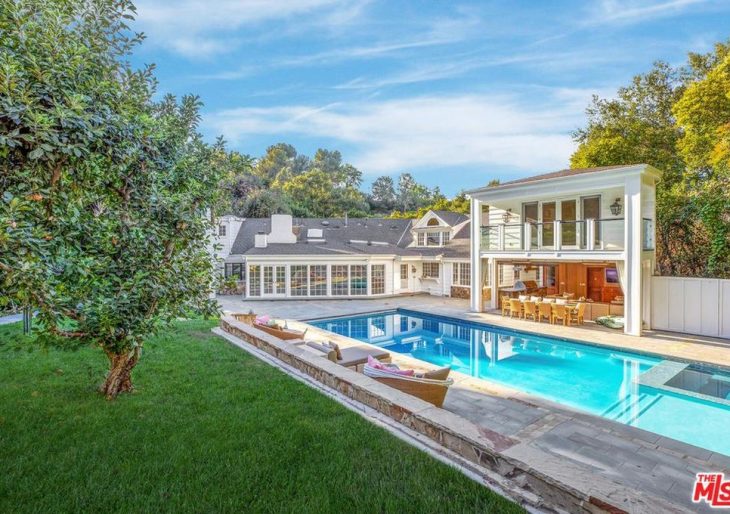 Catherine Bach, AKA Daisy Duke, Finds a Buyer for $5.4M Encino Home in Less Than a Week

Catherine Bach—who played Daisy Duke, the character who taught America to fetishize cutoff denims, in early 1980s hillbilly-fashion adventure series ‘The Dukes of Hazzard’—has lived in the house pictured below since c.1990. But she won’t be for much longer, presumably; the home in Encino, California, appeared on the open market this autumn with an asking price of $5.4 million, and moved into ‘pending’ status within a week of being listed.

The contemporary-traditional home’s facade cuts a modest figure; a streetside impression reveals a roof that sports a prominent pair of gables, porthole ornamental windows, a covered porch entrance, and—most interestingly—an industrial-style, black-finished balustrade that marks the transition between home and garage, and indicates the presence of a second-floor terrace.

From the rear, the size of the home becomes evident. At just under 5,600 square feet, it’s quite large, and the bank of windows that surveys the pool and outdoor living space from the breezily inviting indoor common area hints at extravagance. Most convincing is the fieldstone fireplace, a massively substantial presence that sets off the plank oak floors very well, and brings a wealth of traditional charm to the living room.

There are 6 bedrooms and 7 baths in the house, which sits on a lot of just over eight-tenths of an acre. Plenty of room, then, for guest accommodations and outdoor recreation too, with a detached bungalow and a large pergola filling out the grounds, and the living style, with generosity and grace.

Bach currently appears as recurring character Anita on ‘The Young and the Restless’.