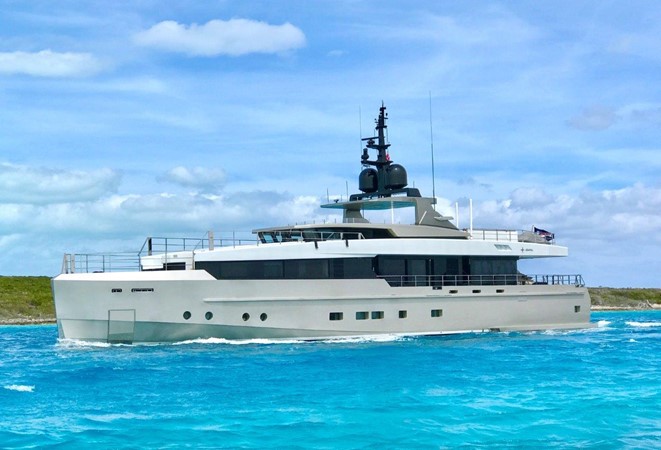 Priced at $8.5M, the Award-Winning JEDI Is a Seafaring Showcase of Italian Design

Admiral-built JEDI spans 123’ of nautical decadence, and she has something the competition doesn’t: She won the 2015 SuperYacht Award for Best Semi-Displacement Two-Deck Motor Yacht in her size class. She was built that same year, and is now looking for a new owner with $8.5 million and an appreciation for finer motoryachts.

JEDI’s exterior was designed by Luca Dini. Her hull is aluminum, and her architecture features a plumb bow and a raised pilothouse; the lines are contemporary and concise, and she is intended for extended forays. Her top speed and cruising speed are 18 and 16 knots, respectively.

The swanky interior is the work of Gian Marco Campanino and Admiral. A sense of space is paramount to the living style sensibility, and nary a claustrophobic corner is to be found inside this yacht. Dark wood features heavily as a primary cosmetic accent, with marble adding additional texture. Mirroring and LED accent lighting contribute to the atmosphere; the latter is put to especially effective use to highlight the leather-trimmed glass staircase.

Exterior lounge space includes the expansive bridge deck, which is designed as a beach club, and features a jacuzzi tub and three lounging berths. A bar and grill station service the lounge chairs and exterior dining table.

JEDI was refit in 2017, 2018 and 2019. Revisions include a new tender bay, sauna rebuild, stabilizer refresh, Creston entertainment, among various and sundry updates. JEDI sleeps 11 in five staterooms, including two VIP full-beam staterooms. There are accommodations for six crew members in three cabins as well.