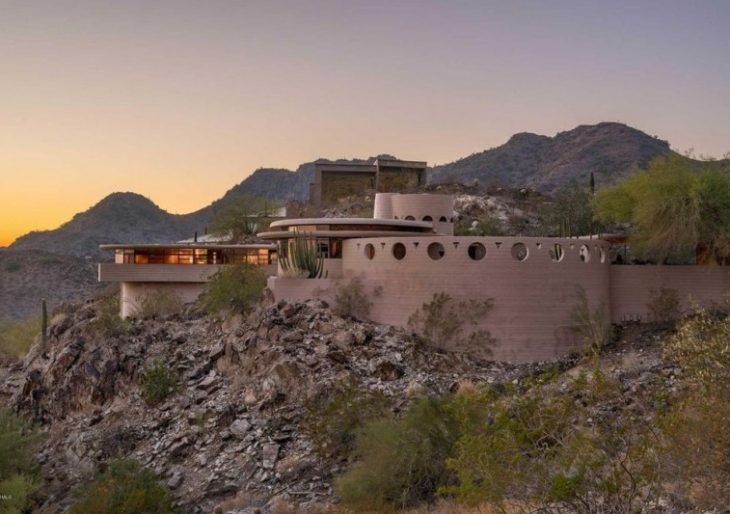 Frank Lloyd Wright’s Final Masterpiece on the Market in Phoenix at $2.7M

After building Taliesin West as a winter getaway property for himself and his family, Frank Lloyd Wright set about designing a few homes and civic buildings in the city, Gammage Auditorium among them. This month, one of them—the Norman Lykes house—hit the open market with an asking price of $2.65 million.

This home stands as a particularly singular property, even among Wright’s residences in the Valley of the Sun. The flared roof of the Boomer residence may rise out of the sun-blazoned desert sand like the wings of the Phoenix, but the interlocking circles of the Norman Lykes house are the architectural equivalent of an American futurist statement that still packs an iconoclastic punch…and is romantically idealistic to boot.

Within, the home is cerebral and soothing, adventurous and cozy, luxuriant and ascetic; Wright’s gift for poetic reconciliation, then, gets abundant expression. The Lykes house—drawn up by Wright in 1959, and his last—is the work of an architect at the summit of his creative powers, but also a reflective one; the philosophical subtext suggests cyclical interplay. The project was completed in 1967 by John Rattenbury after Wright’s death, according to Wright’s instructions.

In keeping with Wright’s acute sense of connection between natural landscape and human engineering, the Lykes residence establishes dialogue with its surroundings. The house employs desert earth tones throughout, with slate tile floors, masonry, and an abundance of mahogany filling the interiors with riffs on beige warmth.

The living room is midcentury-modern in spirit, a beautiful space that encourages gathering and interaction between residents and their guests, while the kitchen and home office are rimmed with half-moon accent windows. The curving lines suggest grace and motion throughout.

The Lykes house spans just under 3,100 square feet, with three bedrooms and three baths. The home’s exterior is a protected courtyard, with a privacy wall, a crescent-shaped swimming pool, and patios for outdoor lounging and dining.