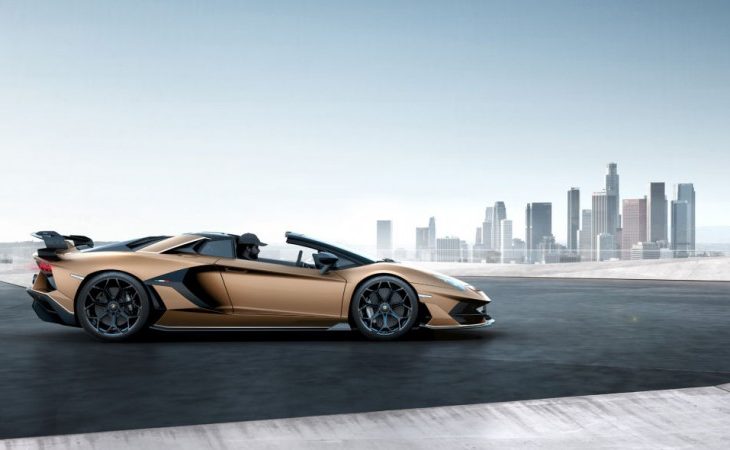 Lamborghini’s contribution to this year’s Geneva Motor Show is an Aventador with a difference: an optional top. That’s right, an SVJ Roadster. As usual, it’s hard to look away.

The model variation represents a curtain call of sorts for the model, and possibly for a regular production naturally aspirated V12 from Lambo, who—like virtually all other European automakers—is moving toward an at least hybrid EV production roster to answer growing concerns about climate change.

In spirit, the open-top Aventador’s design picks up where the Centenario Roadster left off two years ago, featuring a targa panel made from carbon-fiber. The top must be manually detached and stored onboard.

The SVJ Roadster receives a tweaked 2.0 version of the Aerodynamica Lamborghini Attiva active aero system. A floating splitter and more dramatic fins augment the SVJ’s 4-wheel steering and active suspension. The Roadster is a little heavier than the hardtop, as expected, but only tips the scales at a bit over 100 pounds weightier than the SVJ; a series of lightweight components help keep the variant from putting on too much heft. It can still launch to 62 MPH in less than 3 seconds.

The interiors feature leather and Alcantara, carbon fiber accents, and distinctive cross-stitching. Badging inside and out bellows the car’s identity—superfluous, perhaps, but expected. The SVJ Roadster will be limited to just 800 production examples.

And what is next for Lamborghini? As widely reported, a hybrid V12 model that stores energy using supercapacitors as well as batteries. Which sounds very promising, and very exciting.