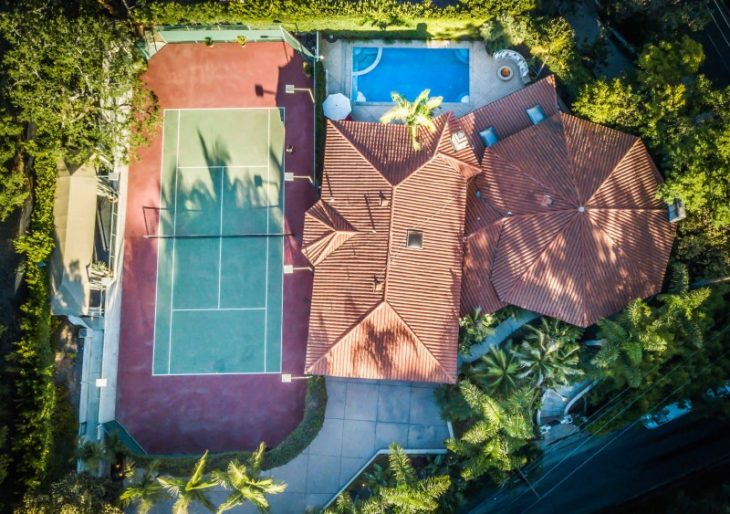 Anna Faris and Chris Pratt have listed the home they bought together in 2013. The couple—who split in the first half of 2017—are asking $4.995 million for the home, a pleasantly cozy Mediterranean-style that dates to the late 1970’s.

The property is tucked away in the Hills; the lush hedges and many mature trees help give it an appealingly hidden and self-contained feel. The house mixes Spanish-style and suburban design cues of the build period. There’s a little English influence in the interiors, and a little contemporary sneaks in, too.

The home’s indoor living spaces have a few surprises waiting. A carved living room fireplace mantel, tongue-in-groove ceilings, a turret entry, a den with a half-vaulted ceiling, an extravagant wet bar, and floor-to-ceiling oak paneling are highlights. Floors are either oak or natural stone tile.

The house features four bedrooms and 4.5 baths. The master gets a good portion of the home’s roughly 4,700 square feet, and features a dramatic contemporary fireplace and a private terrace. The bedroom is large enough to accommodate a private sitting area.

Outside, too, spaciousness prevails. The property packs in a lovely new summer kitchen with slab marble counters, with a covered porch sprawling to include a living area and a dining area. A pool and spa, water features, and a tennis court are also present, giving the property a comprehensive look that isn’t busy or cramped.

Anna Faris starred in this year’s remake of the comedy ‘Overboard’; as ‘Mom’ she’s in her sixth season, which began broadcasting in September. Chris Pratt takes the lead in his second film in the Jurassic Park franchise, ‘Jurassic World: Fallen Kingdom.’