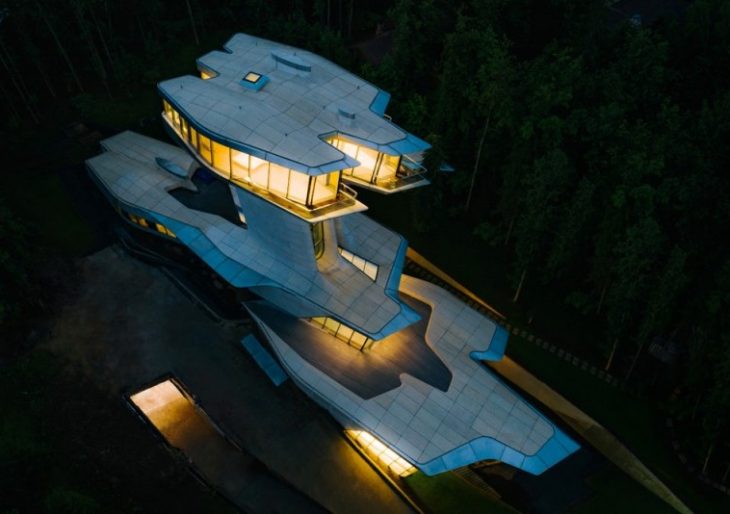 Perhaps you’ve heard of Earthship, the sustainable architectural firm that began in the Southwest in the early 1980’s. The company’s designs champion ecological relevance over all, using recycled materials and alternative energy to express residential living as an ideal balance between a human being’s specific home and more abstract home, the Earth itself.

Well, with characteristic creative extravagance, Zaha Hadid’s single foray into residential architectural design is, visually, the reigning ship-evoking house we can imagine. The home is divided into decks, and is crowned by a superstructure-like master suite accessible via a staircase or elevator.

Some residential architects will design a house in keeping with its landscape. Ideally, for them, each complements the other. The Southwestern Earthship takes this principle to heart.

‘Capital Hill Residence,’ as it is called, is, by necessity, an imperious design that finds similar interplay in its aesthetic form; as it is located in a heavily forested area outside Moscow, the owner stipulated an unobstructed view from the bedrooms as essential, and the final product is then an expression of authority, even domination. But the amount of movement suggested within the design makes it pure Hadid, and expresses interplay with its landscape in a fluidity that voices perennial continuity.

Interior renderings of the house reveal many Hadid hallmarks, most recognizably the playful referencing of sci-fi imagery, the evocation of biological forms, use of LED lighting as a transformative effect, and an ethereal expression that here is manifested in pale hardwood and generally off-white walls.

An enormous undertaking, the house was finished only recently, and was clearly an expensive labor of love.