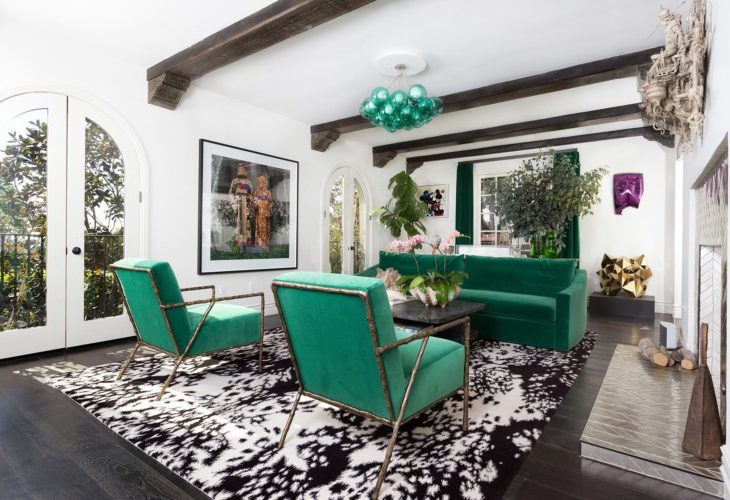 Contemporary soul singer Usher has listed his Los Angeles home for $4.2 million. Usher purchased the home in 2015, for $3.4 million.

A Spanish eclectic dating to 1926, the house has charm to burn, even after significant renovations. The exterior features a pleasing mix of warm and cool tones, a nice mix of window styles and doors; in keeping with the style and period, it presents a pleasingly idiosyncratic streetside impression overall.

The interiors are renovated heavily, with spaces engineered to elicit variegated responses. The foyer is so dramatic it’s nearly gothic: black walls, black wrought iron, chilly pendants, with a broad clerestory offering a much-needed release from the romantic interior gloom by voicing a greater context. The dining room is executed in blue and black, while the kitchen and livingroom lighten things up somewhat; the latter features original arched French doors leading to a second-floor balcony.

There are five bedrooms and 4.75 baths throughout the 4,261 square feet of living space. Bedrooms retain their original spirit of individual charm, fitting in with the general feel of the home. Exterior spaces surprise, with a deck, terrace and patio adding to the home’s poetic feel; even the pool feels secretive.

Usher’s musical career has been augmented by numerous screen appearances. Roles include a supporting part in ‘Hands of Stone’; the boxing picture cast him alongside legends Rubén Blades, Ellen Barkin, and Robert De Niro.