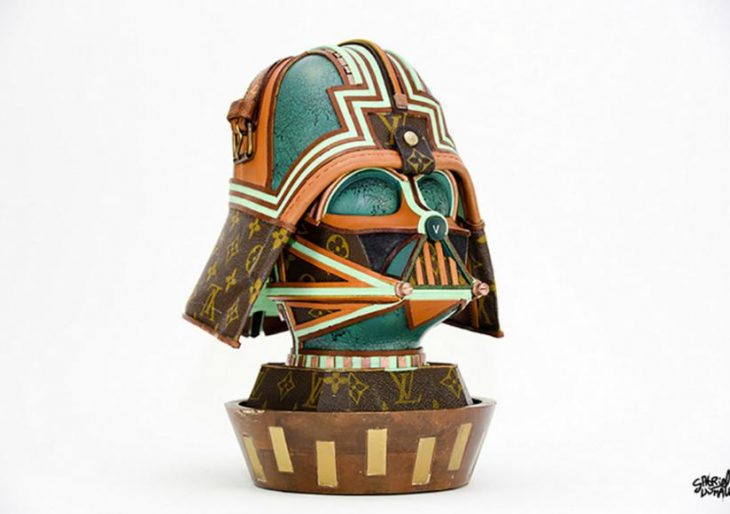 Star Wars. As pop-culture has come to define our culture, the modest 1976 pastiche film inspired by 1930’s serials and Eastern philosophies has evolved to become a primary myth of the global era. We may not be able to agree on much, but we can certainly agree that Solo waited too long to kiss Leia.

Sculptor Gabriel Dishaw has Star Wars on the brain a little bit, too, since he’s taken inspiration from the iconic franchise for his newest works, using Vuitton as a means of expression. High culture and pop culture are one in the designs, united under the aegis of flashy consumerism-as-art which the house of Vuitton has invented.

The beautiful—albeit quirky—sculptures of Star Wars iconography pictured below are crafted from classic Louis Vuitton items, making them pastiches of pastiches: Dishaw utilized broken down vintage Louis Vuitton bags to cultivate and create pieces for his sculptures, including the striking Darth Vader helmet. The anti-hero has never looked so dazzlingly couture.

While the high-priced homages might seem like sacrilege to Star Wars true believers, or a misfire of epic proportions to the highbrow set, there’s no doubt that the Indianapolis-based artist has successfully blended pop-art, high-end fashion, and the Lucasian universe into a cultural statement for our times.

The sculptor used his unique materials to also craft a C3PO head, a Kylo Ren helmet, a TIE fighter, and an Imperial Walker.