Steve Cohen’s duplex penthouse in One Beacon Court returns. The billionaire hedge fund investor has had the property on and off the market for about five years now. Cohen purchased the penthouse in 2005, paying nearly $13 million before hiring sophisticated modernist architect Charles Gwathmey to execute an extensive, and very expensive, renovation.

The renovated unit first hit the market in 2013, with an asking price of $115 million; a trifle high, even given Gwathmey’s revision. By last autumn, the price had dropped to $67.5 million, and, when the 9,000 square-foot apartment failed to sell, it was pulled from the market once again. Its recent re-listing finds it priced at $57.5 million.

Elements of Gwathmey’s style are vividly represented in the unit, most notably the conflation of geometric forms, planar intersections, and desire to include and rearrange a breadth of modernist tropes. The warmth of the home emerges from the clarity of the vision: the interiors are spectacularly engaging, and incredibly communicative. It’s not surprising that a buyer has been difficult to find, though: this interior is a world apart from the ethereal reticence, and emphasis on surface texture and luxuriant novelty, that defines the current fashion in upper-end high-rise residential real estate.

A gifted investor, Cohen launched his own company—the now-defunct S.A.C. Capital Advisors—in 1992. He then founded Point72 Asset Management, and is currently planning a new hedge fund. His net worth is estimated at $13 billion. 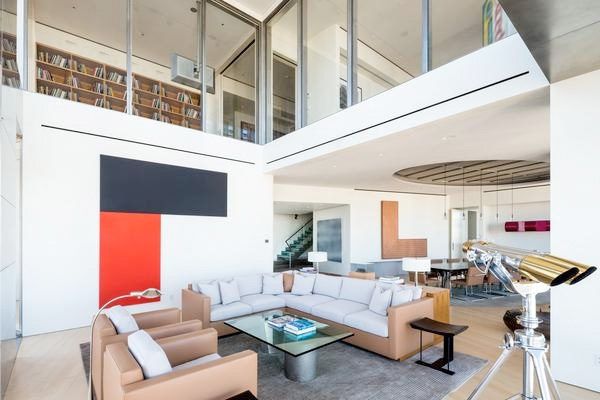