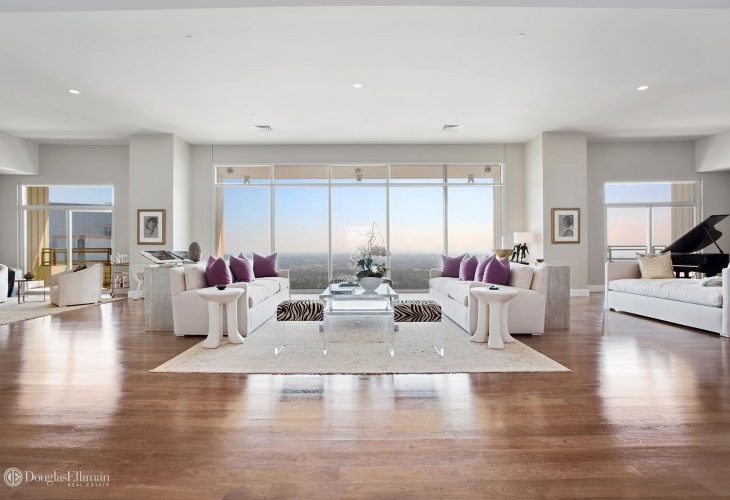 Actor Matthew Perry recently dropped a bundle on a full-floor penthouse in the Century Building in downtown Los Angeles. Perry purchased the property for $20 million; it had been listed at $26.5 million prior to the sale.

At 9,318 square feet, and with 10’ ceilings, as well as abundant glass offering panoramic views of L.A., the residence is executed with an extraordinary sense of space. Largely open-concept, with a palatial atmosphere of continuation, the modern lines, lack of ornament, and largely neutral toning distinguish the interiors generally.

Floors are oak throughout, with lovely grain; given the off-white and soft grey walls and ceilings, they provide the context for much of the home. The formal dining room and the living area are beautifully realized spaces, and the kitchen has a quiet elegance, with marble countertops, and a suspended vent.

The master suite contains one of four bedrooms in the apartment; it’s very spacious, and its convex wall provides an intoxicating background. It incorporates a large sitting area—or several, depending on your point of view—as well as a pair of support columns, which serve to enhance the sense of scale. The large and beautifully-appointed master bath features inlaid marble walls and floors. There are five full baths, and three three-quarter baths in the unit overall.

Perry’s role of Chandler Bing on the mega-hit sitcom ‘Friends’ nearly defined his career, until he embarked on a new phase as a playwright. His first play, ‘The End of Longing,’ premiered in London before moving stateside, where it continued Off-Broadway at the Lucille Lortel Theatre earlier this summer.