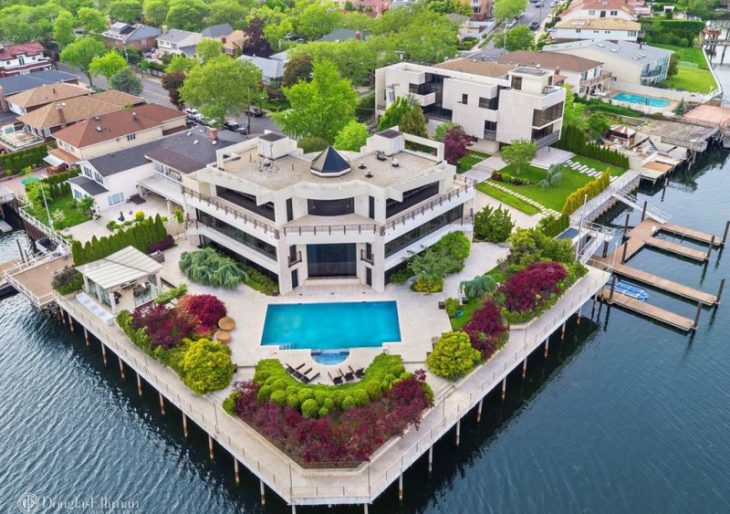 Taking the prize as Brooklyn’s most expensive current listing is this contemporary near Coney Island. The 14,000 square-foot house is owned by Russian Galina Anisimova, who has it listed with a current asking price of $18 million.

When the house first hit the market, in 2013, it did so with an asking price of $30 million, which was roughly the price of the custom build. Anisimova had the existing home razed in order to build, and later purchased an adjacent property, and razed that home as well, for the guesthouse.

A four-story monolith which looks something like a collegiate library, the house is situated in the Mill Basin neighborhood, which—for the non-Brooklynites out there, is on the border of Jamaica Plain. The home contains eight bedrooms and nine baths, and four full floors of living space.

The interiors of the home are spectacularly rendered: grandiose, insistent in their need to impress, and wildly variant regarding materials and visual texture. The amount of stone used gives the home a well-defined palatial feel. A massive accent wall with a minimalist fireplace graces a great room, and a transition is provided by a circular installation ornamented with relief.

Some of the design influences seem tossed in almost arbitrarily—a shoji screen—and some are more remarkable than tasteful—the pendant lighting which menaces in the formal dining room. But the house, as a statement, is itself remarkable, and certainly controversial.

The list of amenities is a long one, but includes a solarium, an enclosed outdoor dining room and kitchen with attached pavilion, and a private marina that will host a handful of yachts. The guesthouse is significant as well, for a guesthouse: 7,800 square feet should keep guests happy even during extended stays.