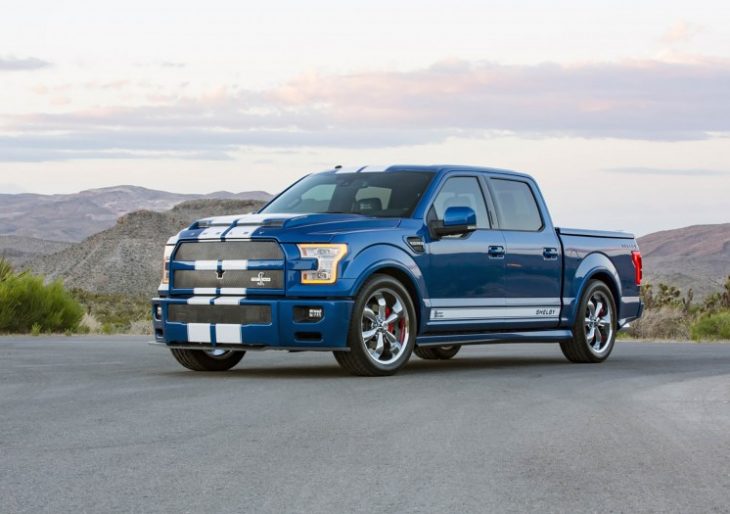 A pickup with 750 horsepower doesn’t come along every day. Shelby America has produced one, though, and they used a Ford F-150 as a base model.

The Super Snake is one of Shelby’s primary catalog offerings, a muscle-car iteration of a production vehicle, typically a Mustang. The company had enough success with the series to want to expand its offerings; it also, very rightly, noticed a vacant little niche in the American car market: the muscle truck. And, the Super Snake pickup is an homage to the classic hot-rodded trucks of the 1950’s.

The Super Snake is self-consciously a street-rod at heart, though, as opposed to production trucks from Ford or Dodge. Its power allows it enormous towing capacity, but it’s really a sports pickup. Shelby made the front end more imposing, and brought rocker panel extensions, new bumpers, and a dramatic hood into the picture. Wheels are now 22” alloys. A three-tier honeycomb mesh grille gives the Super Snake some track appeal, and the stainless Borla exhaust will foreshadow the truck’s arrival with some requisite rumble.

The Super Snake is available in both rear-wheel and four-wheel drive configurations. The truck is outfitted with a tonneau cover matching the overall racing paint composition. The truck features a lower suspension, too, making it less adept at off-roading, and more adept at high-speed cornering.

This kind of off-the-rack pickup hotrod doesn’t come without a price, though. The Shelby Super Snake pickup stickers at just south of $97K.