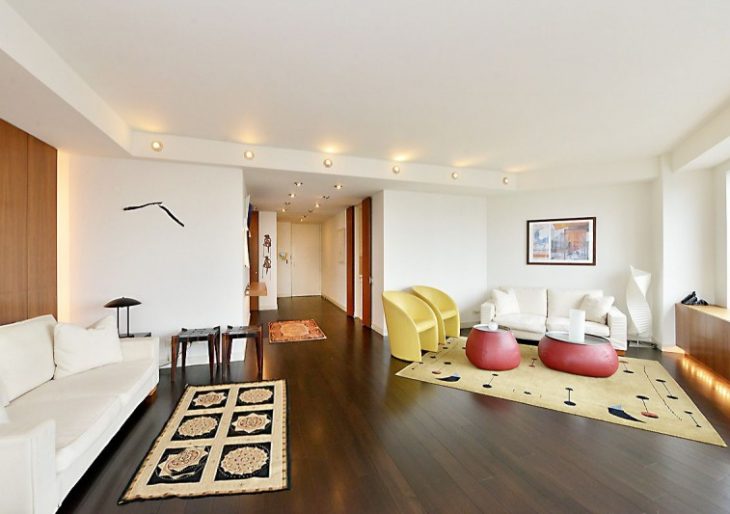 Quick-witted Jackie Mason has traded apartments in Manhattan’s Metropolitan Tower. The legendary and controversial stand-up comedian and his wife—Jyll Rosenfeld, also his professional manager—have purchased a new residence in the building on Central Park South for $4.1 million; they have had their smaller unit in the building listed for $2.7 million since this past February.

The couple’s new apartment measures 1,489 square feet, and contains two bedrooms. It’s only about 25 square feet larger than the previous unit, but the layout is favorable, and it’s located on a higher floor, for better views.

The apartment opens onto an open concept common living area, with a smallish kitchen and large living and dining space; the living area features an abundance of glass, and a quirky corner design that, on the eastern side, culminates in a dramatic point. Walls and ceilings in the common living space are whitewashed, with dark-finished plank flooring and lighter wood grain accents, a recessed ceiling, and recessed lighting.

The bedrooms feature a very nice balance between cool tones and warm wood grain, with dark plank floors and mahogany-finished cabinetry offset by soft blue or green. The master bathroom is finished in marble, and lots of it.

At one time, Mason was best known as the very funny comedian who allegedly gave Ed Sullivan the finger. Sullivan canceled Mason’s contract as a result of the incident; Mason sued Sullivan for damages and won, but his career suffered until a triumphant return during the 1980’s.