Rolls-Royce Crushed 1,000 Diamonds to Give this Custom Ghost a Super Luxe Paint Job

A dream car for the ‘Gentlemen Prefer Blondes’ set!

‘Glistens like no other’ is how Rolls-Royce describes the Ghost ‘Elegance’ one-off. The car’s finish has been treated to the dust of 1,000 diamonds, so it’s hard to argue with them. Rolls presented the car as the ‘Jewelry’ component of its tripartite Geneva presentation; the other segments were ‘Fashion and Tailoring,’ and ‘Engineering.’

The Elegance was first revealed shortly before the Geneva Auto Show, and made its sparkling debut at the Swiss exposition this week. The car was a custom order—natch—but the customer who ordered it remains anonymous; that’s a bit odd, really, considering the car is an extrovert’s fantasy ride, and wears a coating of uptown bling which just might be visible from outer space.

The diamonds were selected and tested by the bespoke Rolls team for suitable radiance in the context of finishing an automobile. They were crushed to a powder, and mixed into paint. The whole process of creating the diamond paint took a couple of months, with another few days for application, the addition of a lacquer top-coat, and hand polishing. The result is smooth to the touch, and bears an eerie three-dimensional quality.

The base of the Elegance is a 2017 Ghost with an extended wheelbase, outfitted with the company’s production V12. The Ghost has a 0-60 time of just under five seconds, which may seem a little sluggish for a V12-powered car, until you factor in the two-and-a-half ton curb weight.

The Ghost Elegance was finished in a two-tone interior with tartan plaid and oak veneer accents, and lambswool carpeting. 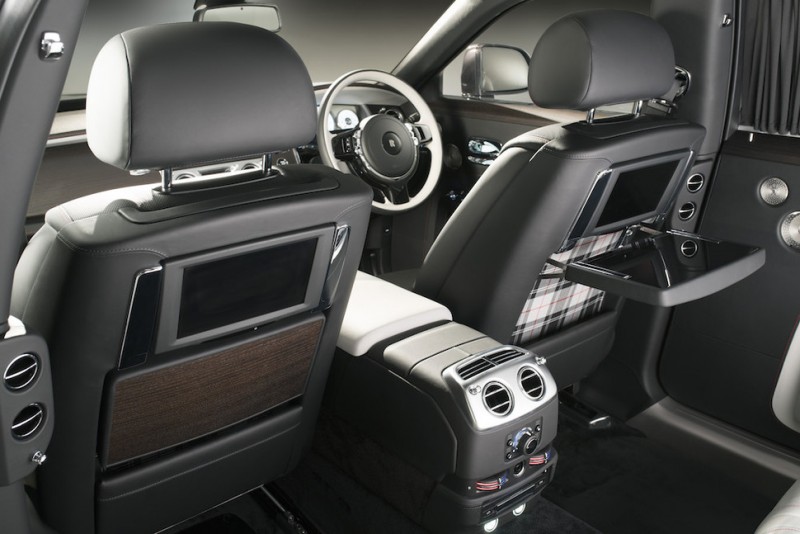