Creatives tend to flock to the same places, and the penthouse at 139 West 19th Street in Manhattan’s chic Chelsea neighborhood is apparently one such spot. Lori Goldstein, Fashion Editor-at-Large for Elle Magazine, has just sold the eclectic apartment to Christina Tosi, owner of the world-renowned Momofuku Milk Bar and her boyfriend Will Guidara.

Tosi and Guidara paid a cool $3.7 million for the apartment, which includes two bedrooms, two bathrooms and a terrace to match its 1,400 square feet of indoor space. Oversized windows, exposed brick and high ceilings contribute to the loft-like aura, while a wood-burning fireplace and the gorgeously landscaped terrace give the home a cozy, highly livable vibe.

Tosi has written two bestselling cookbooks and can be seen as a judge on Fox’s MasterChef. Recently, she helped build the menu at the newly opened Kellogg’s Cereal Bar in Times Square. Guidara, a savvy restaurateur in his own right, is the co-owner of Made Nice, the restaurant group responsible for NoMad, The NoMad Bar and Eleven Madison Park, the #4 Restaurant in America according to last year’s La Liste rankings.

Goldstein is famous for work such as GAP and American Express ads with Annie Leibovitz and the Versace “Valley of the Dolls” campaign with photographer Steven Meisel. She also owns a clothing brand, LOGO, which can be purchased via television’s QVC. She was the first agency-signed stylist in the world and is represented currently by IMG.

During her ownership, the apartment was featured in Elle Décor and the New York Times Style section for its bohemian style. 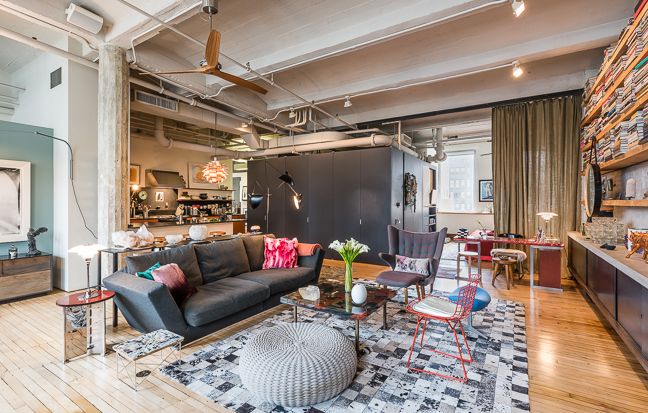