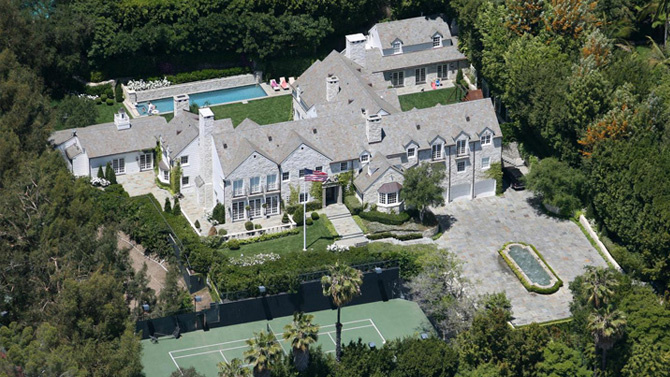 Late last year Tom Cruise had his 1.3-acre gated Beverly Hills compound privately shopped somewhere in the range of $50 million, and recently it was leaked that the home is in escrow for about $40 million in a sale to private equity billionaire Leon Black.

The secured estate holds a 10,286-square-foot, multi-winged mansion with seven bedrooms and nine bathrooms. Other amenities of the home include a lighted tennis court with basketball hoops, a lap-length swimming pool, a children’s playground, and extra apartments for staff or guests.

Cruise purchased the manse in 2006 for $30.5 million with his now ex-wife Katie Holmes. This isn’t the first time in recent years that the mega-movie star has offloaded his real estate holdings. In 2013 Cruise sold a condo in New York City’s East Village for $3 million, and last September he sold his Mullholand Drive estate to Eva Longoria of “Desperate Housewives” fame for $11.4 million.

His 298-acre spread in Telluride, Colorado, is still on the open market for almost $60 million.

Black on the other hand is going the opposite direction and has picked up a multitude of properties recently. He and his wife, Debra, purchased a 30-room Italian Renaissance mansion in the Upper East Side of New York City for $50.25 million a couple of years ago, on top of owning a full-floor co-op apartment in a Park Avenue building, a 6.68-acre oceanfront compound in Southampton, New York, and an over 100-acre estate in Bedford, New York.