This 18-Passenger Explorer Superyacht Was Made for Serious Expeditions

French shipyard Piriou made its debut in the yachting world with the introduction of the 250-foot Yersin at the Monaco Yacht Show.

Named after Alexandre Yersin—a Swiss-born, French scientist and world-traveler whose goal was to find cures for rabies and the bubonic plague—the mega-yacht’s owner Francois Fiat chose Piriou because he desired a ship the same size as the commercial liners the company is famous for building.

Fiat had three requirements when he went to Piriou to make his new ship. First, it had to have an extended range with the capability to travel in both the tropics and polar regions, meaning an Ice Class rating was needed. Second, the onboard technology and propulsion systems had to be eco-friendly. And last, the Yersin also had to be lavishly comfortable and spacious as the owner and his guests could be onboard for months at a time.

The result is an eight-stateroom, 18-passenger behemoth that also has room for 24 crewmembers and two captains. The Yersin also sports a 15,000 nautical mile range at 11 knots, which means the ship can travel from New York to the west coast of France five times before it needs to refuel.

The Yersin features staterooms and an owner’s suite all complete with their own bathrooms, large televisions, and modern infotainment systems.

The mega-yacht’s six levels also hold two gyms, two inner bars, saloons, massage and steam rooms, an observatory, a large sundeck with a swimming pool, a laboratory space for water testing, housing for a seaplane or submarine, and four tenders for daytrips and other jaunts to shore. 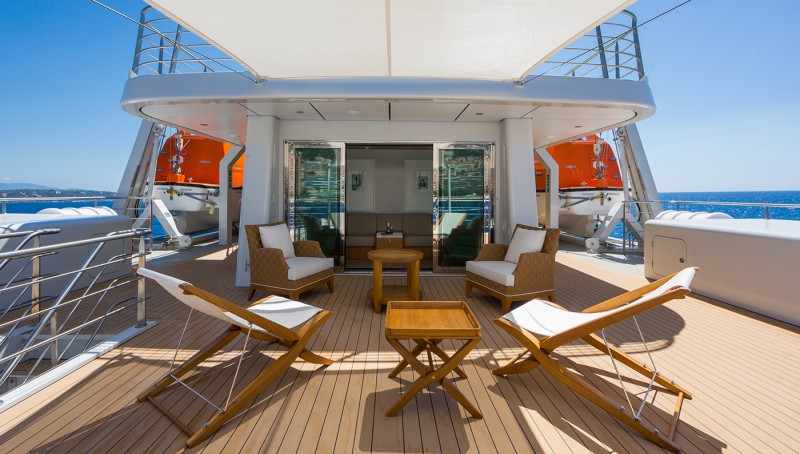